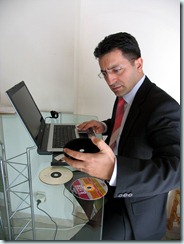 Yesterday at work a coworker who is working with some map APIs and census data found an interesting anomaly.  It turns out that if your GPS location is on the Tappan Zee Bridge you don’t have a zip code.  This is important if you’re trying to give physical address locations to GPS coordinates.

While he went off to figure out what he was going to do with this discovery, I went on my merry way, not thinking about it until later that night—while sleeping.

Last night, I had a dream that I was called before Congress to testify about why, when a person has a phone that gives a GPS reading of location, the person was shown to be inside the building they were standing next to, instead of outside of it.  The discussion went on for some time when I said, “Well, if you don’t like using Google Maps, why don’t you use Bing Maps, Yahoo Maps and even Mapquest is still around.

The legislators were surprised, and asked me to hook up to their projector so I could show them these weird, “new” technologies.

I can only assume that this is because of the discussion of maps and how mapping works with my coworker earlier in the day.  Strange!